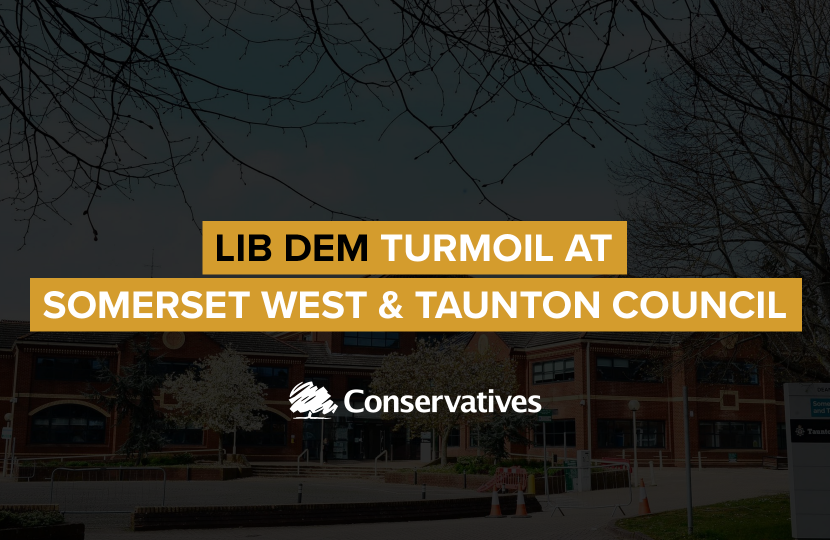 Cllr Martin Hill, former member for the Trull, Pitminster and Corfe Ward, has openly stated his displeasure at the way the Lib-Dem Leadership are running the council and resigned in protest. He is the second Liberal Democrat Councillor to have left the party over the last year following Cllr Sue Buller, Member for North Curry & Ruishton, becoming an Independent, which we understand to be related to a fall out over the council’s finances.

The Lib Dem record with public money isn’t great reading. When the Conservatives took control of Somerset County Council in 2009, the council was saddled with £350m worth of debt, their SouthWest One contract promised millions in savings, which in fact lost millions and now history, seems to be repeating it’s self with mass borrowing, property purchases, disposal of assets and raiding council reserves in just 22 months of taking office.

Taunton Deane Conservatives are deeply concerned in which the fractured Lib Dem Group are currently operating.

Cllr Anthony Trollope-Bellew, Leader of the Conservative Group on Somerset West & Taunton Council said, “This year’s budget at Somerset West and Taunton relies on unspecified property sales and the one off use of reserves. The predicted deficits in future years are not tackled but kicked down the road hoping the creation of unitary local government will cover the problem. There needs to be far greater transparency with the residents of the district about undisclosed borrowing.”

The Trull, Pitminster and Corfe By-Election will take place on Thursday 6th May 2021.

Taunton Deane Conservatives are delighted to welcome Marcus Barr back to the party. Marcus represents the Rockwell Green ward and has joined the Conservative Group on Somerset West & Taunton District Council, taking the number of Conservatives Councillors to 10.